I offer a wide variety of downloadable Patterns for all skill levels - from beginner to advanced. Scroll down to see some of the latest patterns added and click on the 'NEW PATTERN UPDATES' link below or
"SIGN UP FOR NEWSLETTER"
to receive notifications when a new FREE PATTERN is uploaded or when I add NEW PATTERNS to my website. As a subscriber you will also periodically receive information on SPECIAL OFFERS and DISCOUNTS for patterns and pattern sets. 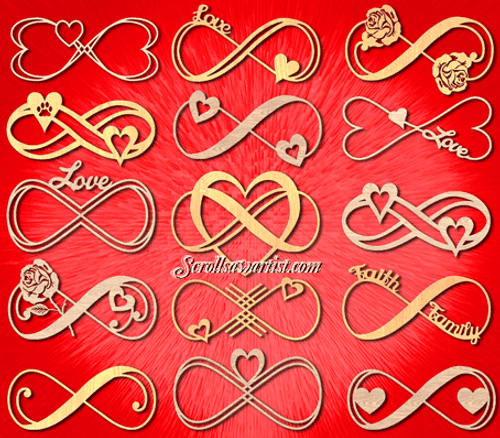 The infinity shape, which looks like the number 8 turned on its side, is sometimes called the Lemniscate (derived from the Latin word for 'decorated with ribbons'.) It was first introduced during the seventeenth century by John Wallis, an English mathematician who wanted to create a symbol to represent the idea of infinity - a sum that is larger than any number that can ever be created. Today it generally symbolizes eternity, empowerment, and everlasting love. The set below includes some quick and easy cuts, as well as some that are more detailed. The patterns may appear flimsy in the image, but the wall thickness of each pattern at its smallest dimension is 5/32" (4mm), which is perfectly 'cut-able'.

Set of Symbols of the four Evangelists